A garden which surrounds the house is often difficult to deal with. This garden had a difficult narrow area to the side of the house [featured in problem gardens] where the grass was poor and the borders narrow. Replacing the grass with brick paving and a period style green oak pergola with brick piers makes an attractive feature linking the front and back gardens. An unused sunken part of the plot was transformed into a kitchen garden with a seating area and safe steps for access. 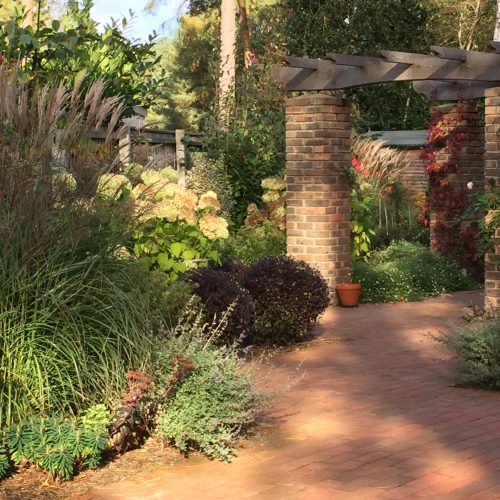 This awkward narrow space at the side of the house is transformed with clay paving, planting and a bespoke pergola 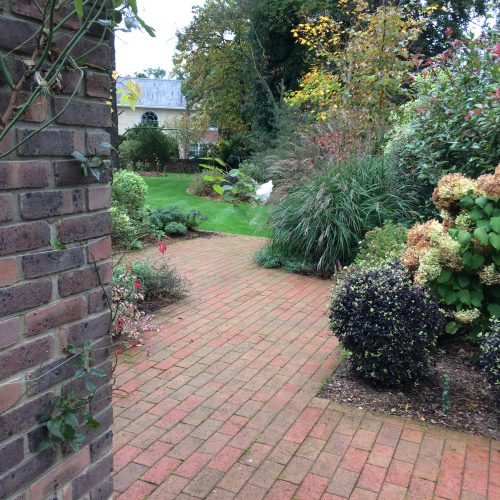 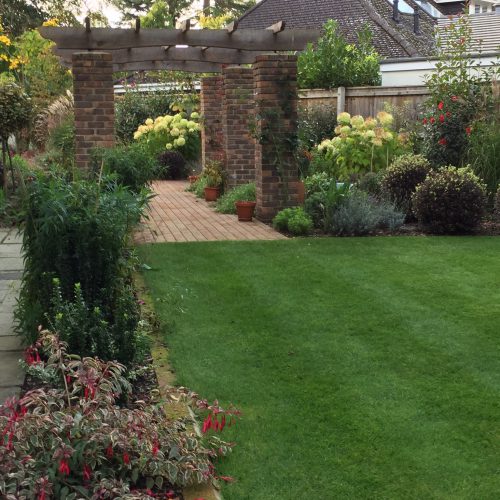 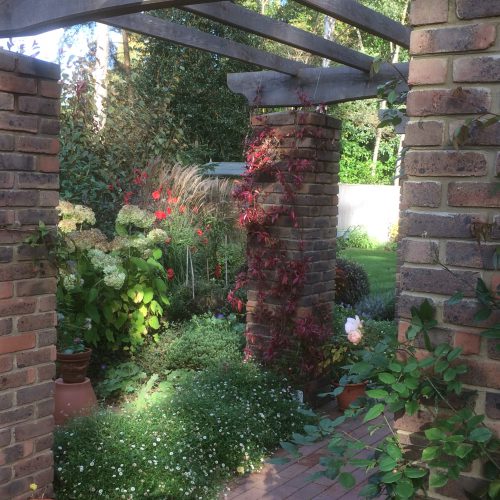 View through the pillars of the pergola to the garden beyond 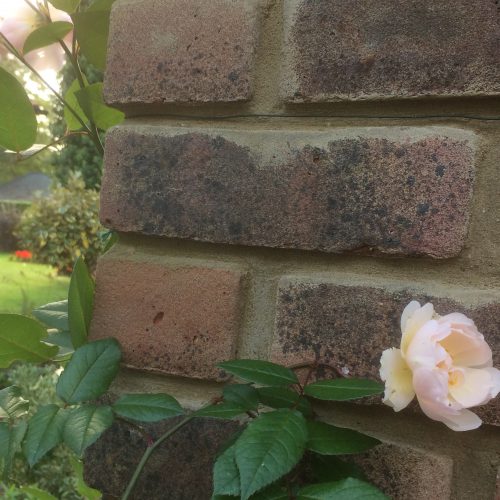 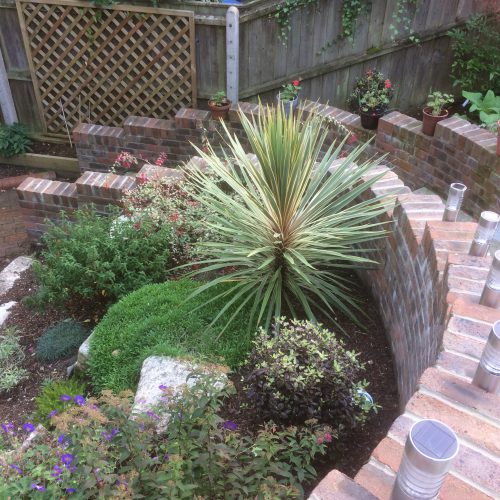 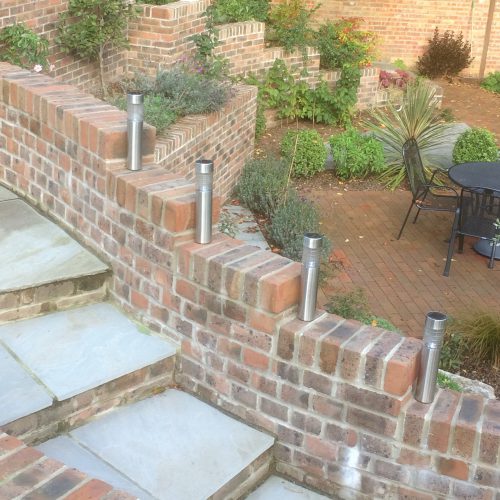 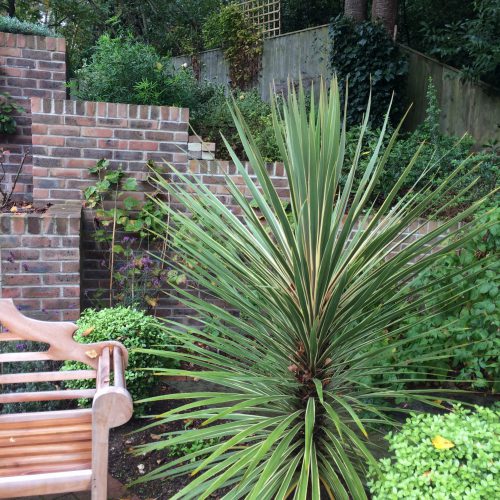 The tall retaining walls are softened by planting

The garden of this newly renovated house was a complete blank canvas. Formal structure consisted of raised beds, brick paved paths, a wooden pergola and a raised pond to create different 'rooms' and encourage the whole garden to be used. Planting was designed to soften the hard landscaping and attract birds and wildlife into the garden where before there were none. 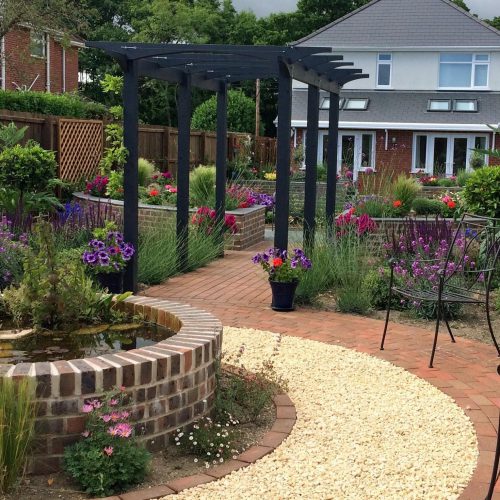 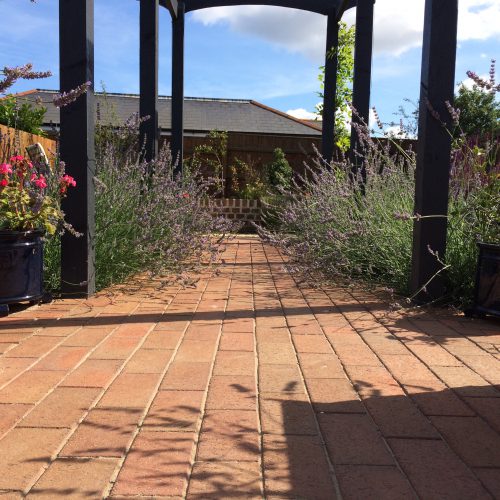 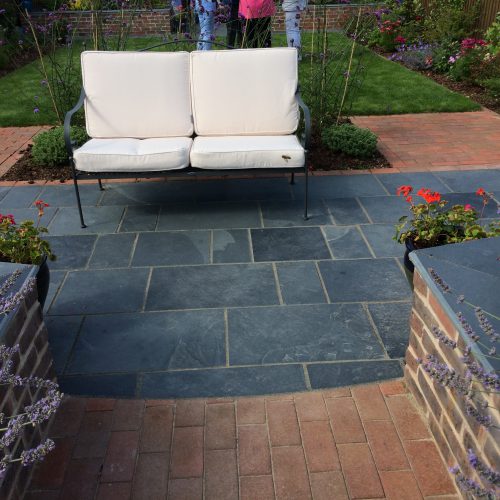 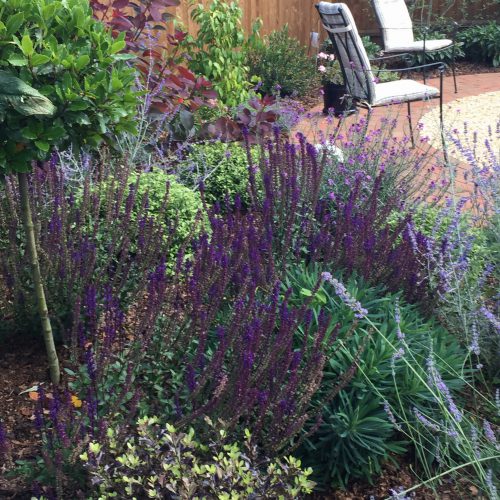 The layout of this large garden with its sweeping curves is designed to be a showcase to a wide range of plants. Island beds create grass paths for different routes around the garden and various features catch the eye along the way. A wooden deck surrounding a vibrant pond is a lovely place to sit and enjoy the evening sun. 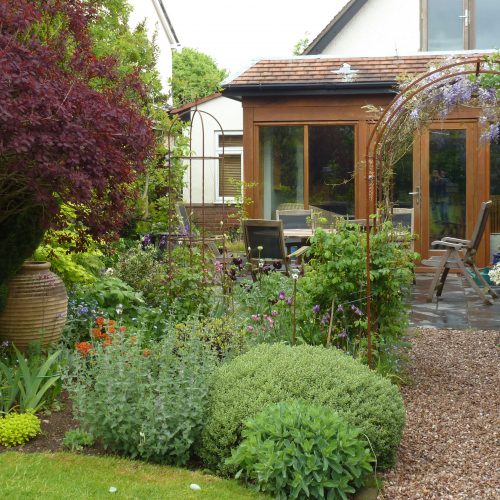 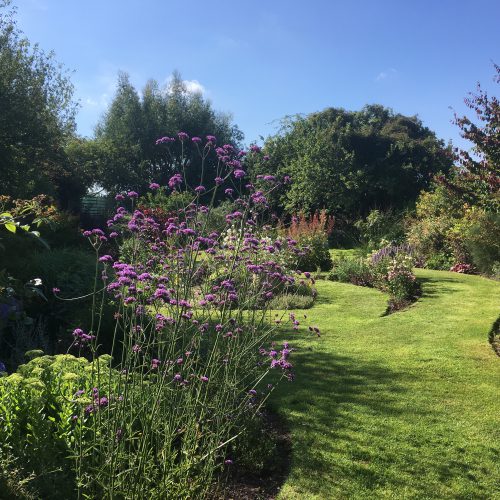 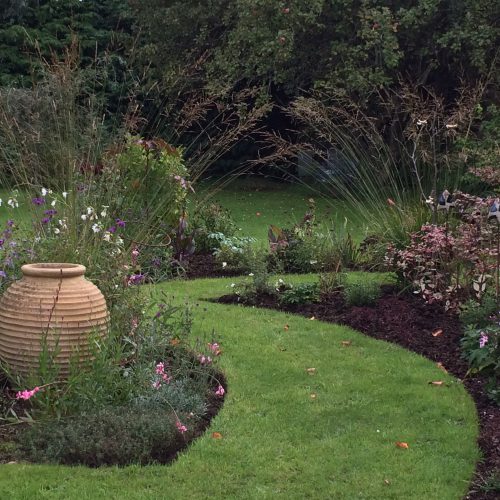 Feature urn provides a focal point amongst the planting 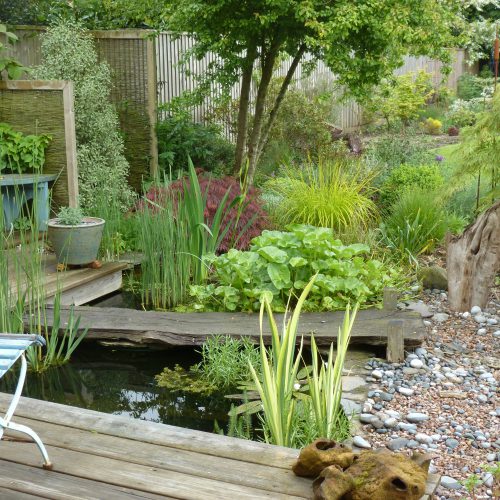 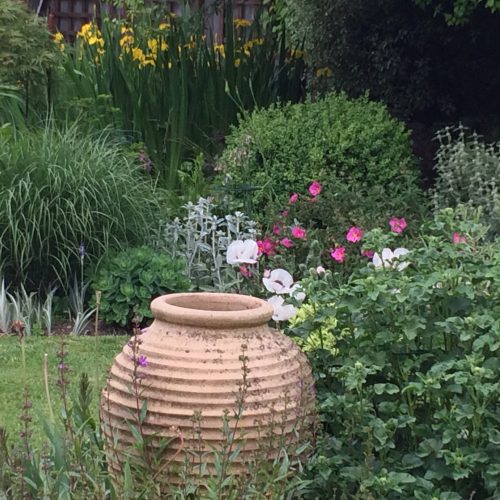 This is a garden designed to suit the needs of a growing family and a keen gardener with a love of cottage garden planting and raising productive plants. An Alitex greenhouse forms the central feature of a dedicated vegetable garden with raised beds and a brick path which connects the vegetable garden with the house. A large patio is broken up with herb beds and a rockery and raised pond makes a feature of a difficult change of levels. 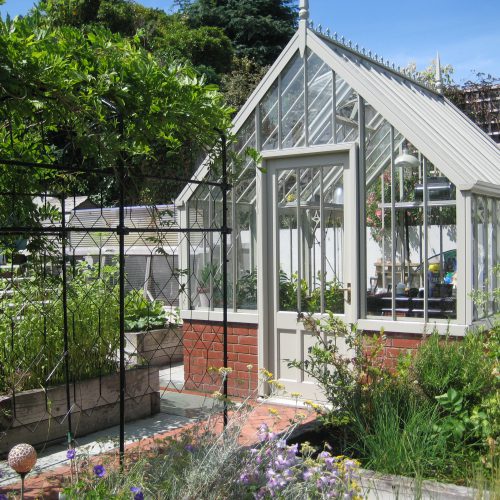 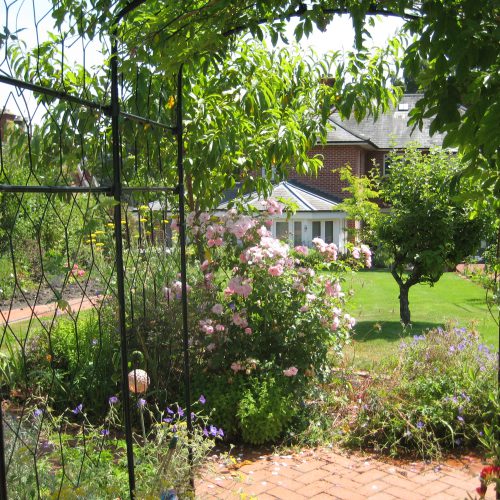 A metalwork arch with wisteria growing over 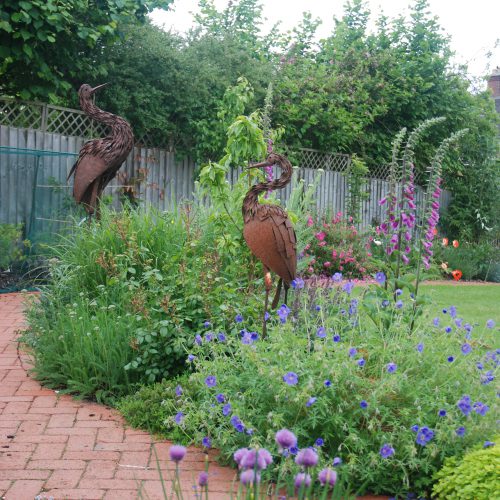 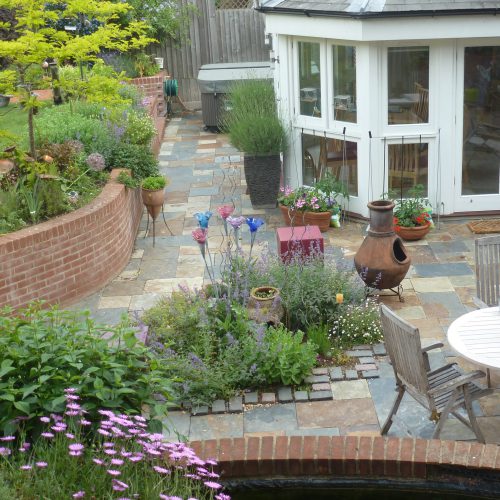 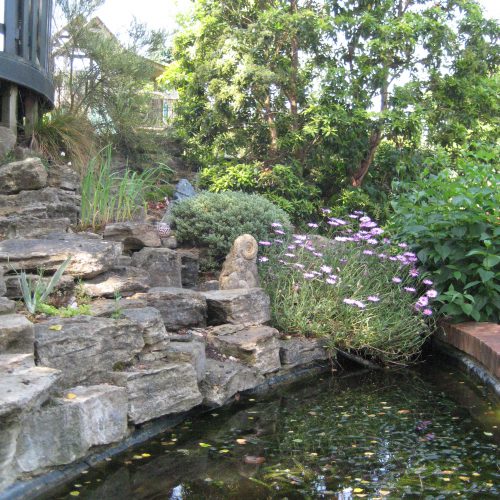 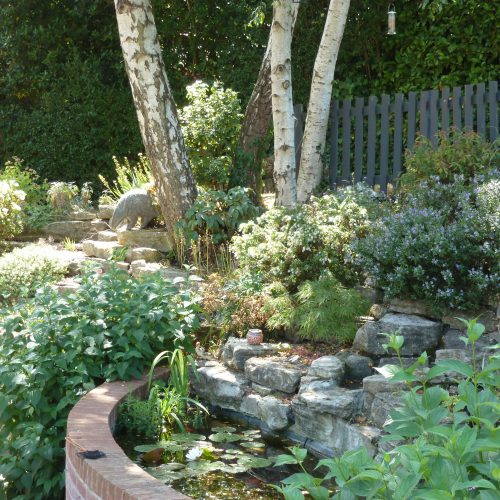 This wide shallow L-shaped garden lent itself to an angular design both to distract from the relative closeness of the back boundary and to create a low maintenance scheme. Feature areas of gravel and spot planting with low maintenance shrub beds make the garden interesting but not a chore to look after. An undulating vertical sleeper wall is a feature in a large raised bed with spot planting in front and shrubs behind. 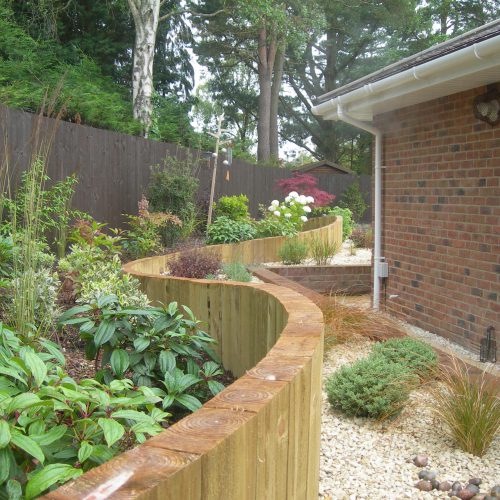 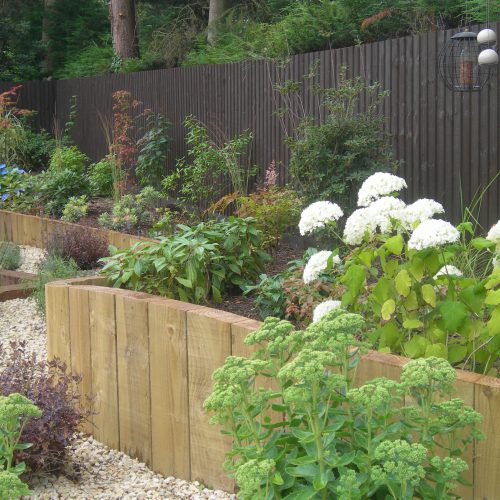 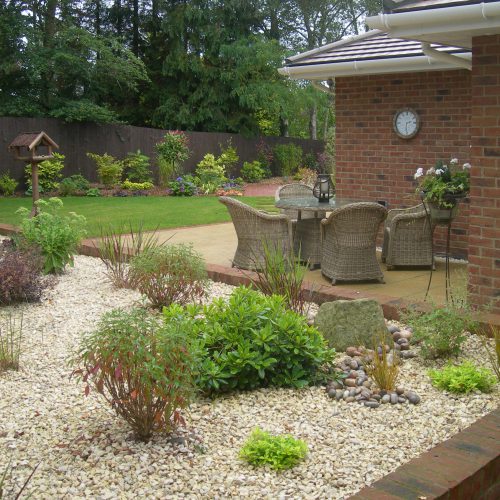 Low growing planting with a gravel mulch to suppress weeds 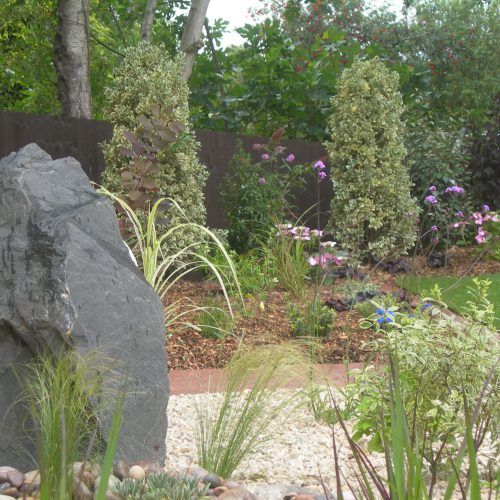 This large garden, originally laid to lawn, was transformed into a space for the whole family. Soft curving brick paths with arches over lead to a large shaped lawn. A summerhouse provides a focal point at the end of the garden where the last of the sun can be enjoyed. A pergola over the patio with large beds in front create an intimate space to sit and enjoy the view of the garden and raised pond with planting around. 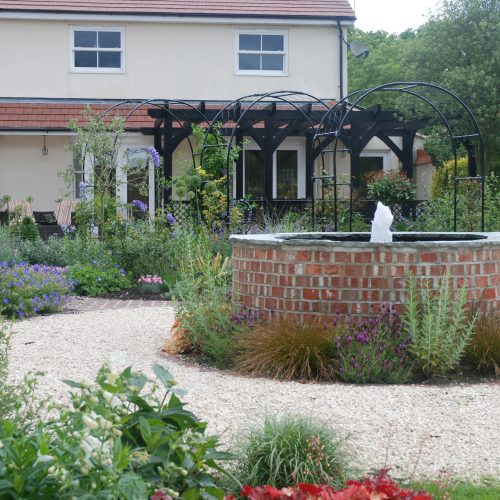 View of raised water feature with planting around 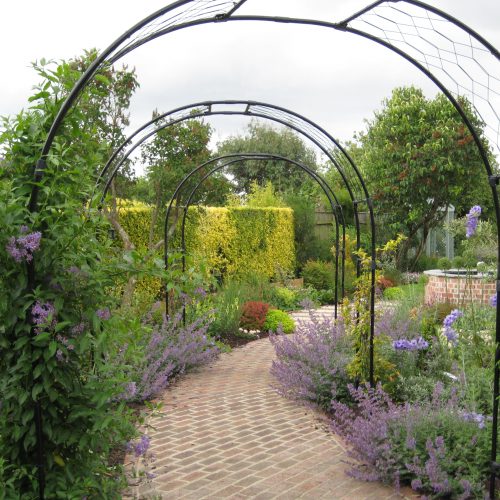 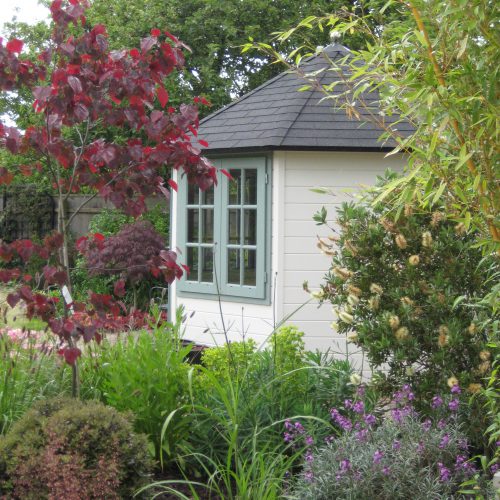 A painted summerhouse is set amongst abundant planting